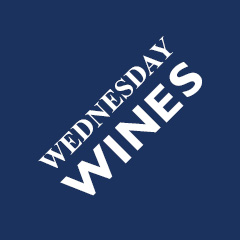 with Sandrine Garbay at Portland Restaurant

Today, I attended a tasting hosted by winemaker Sandrine Garbay who has been working at Yquem for 27 years.  Here is a review of the soon to be released 2019 vintage, but first some facts and also, in italics, some notes from the Château (which includes a tiny amount of my editing). 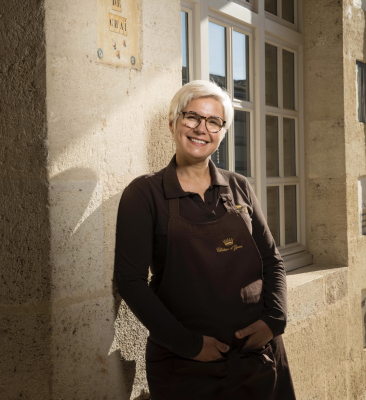 Although February and March 2019 were fine and dry, the beginning of the growing season was dominated by very cool temperatures.  Fortunately, flowering occurred over the course of six days in early June, during a spell of warm, dry weather.

Late June saw the onset of very warm weather conditions, which lasted virtually without interruption until the 15th of August (with 50 days of temperatures at least 3.6°C above the seasonal average). This heatwave provoked vigorous growth, allowing the vines to compensate for their fairly slow start to the growing season.

In the meantime, a drought began to take shape. Sauternes saw only 2.5 mm of rainfall until the 26th of July, when the region received an extraordinary 112 mm of rain, which fully replenished the soil’s water reserves.  The rain lasted for several hours, and a further 40 mm fell between the end of July and the 12th of August, soaking deep into the sandy-gravel terroirs.

With the threat of a drought now lifted, ripening progressed rapidly as the warm temperatures continued and the weather turned dry again.

The fine weather conditions between the 26th of August and the 5th of September allowed us to pick the grapes destined for “Y”, the estate’s dry wine, a perfect balance of richness and freshness.

This relatively early harvest proved to be crucial to ensuring the quality of Y 2019, as subsequent warm weather caused the acidity in the grapes to dissipate.

The heat returned in earnest, and between the 13th of September and the 5th of November the Sauternes region experienced 55 days of temperatures at least 3°C above the seasonal average. No more rain fell until the 20th of September, and as yet, there was no sign of Botrytis cinerea.

Fortunately for us, between the 21st and the 25th of September, the temperatures remained warm while 38 mm of rain fell, triggering the splendid development of noble rot throughout the entire vineyard.

A wonderful high-pressure system arrived in the first week of October, bringing with it warm, dry and windy conditions, which helped the grapes in the great clay terroirs gain in concentration. The Sauvignon Blanc was tested on the 7th of October, and on the 10th harvesting finally began for Yquem 2019.

Over the course of five days, one of which was a Sunday, the expertise of our pickers enabled us to capture the essence of a very fine vintage combining ample fruit, freshness and concentration.

The extraordinary window of opportunity provided by the weather then suddenly closed. On the 14th of October, we received 40 mm of rainfall.

Our perfect knowledge of the different plots in the vineyards allowed us to focus our efforts exclusively on the best terroirs. The more fragile terroirs were picked, and the grapes had already begun to spoil.

The more fragile terroirs were harvested between showers on the 17th, 18th, 21st and 22nd of October. 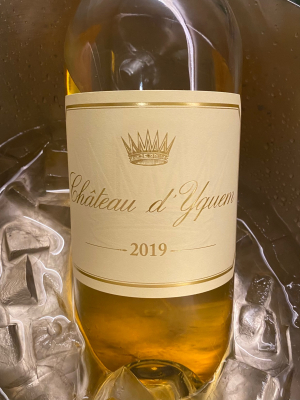 Superbly exotic, wonderfully complete and seemingly very smooth, pure and buoyant already, this is an immensely pleasing wine, and it is surprisingly floral and open.  There is fabulous length here and yet the flavour and delivery are controlled, rolling deliberately across the palate slowly, steadily, metronomically.  It is akin to a bracing Atlantic wave rising in the ocean, breaking, cascading and then gliding up a broad beach in slow motion, whereupon the fruit notes subside into your tastes buds as the water does into the sand, only to be repeated.  There is a slightly exotic edge here, too, with lime blossom and hints of lemongrass, but the creaminess and florality underneath are familiar and welcoming.  This is not a muscular wine but a soothing style, and it is also not overly closed or tense either.  While there is an undercurrent of acidity which nips at the heels of the flavour, it serves to refresh the palate, and while I very much enjoyed sipping away at my glass today, there is undoubtedly a forty or fifty-year life ahead, if you have the patience.  In terms of the colour, which is pale with discreet green tinges (which match the citrus theme on the nose and palate), Sandrine explained that this was a unique Yquem in terms of its blend.  My tasting notes reflect this – I have never used some of these descriptors or mental images before.  Surely Yquem is supposed to be more imposing, structured, orange-peel-imbued and oleaginous?  Not in 2019.  There is a huge percentage of Sauvignon in this vintage, as you will see above, and the previous highest portion in a bottle of Yquem was 30%, so this record has been obliterated in 2019.  As one might expect, Sandrine elaborated that she and her team do the blending blind, and the finest balanced combination of these two grapes just happened to include 45% Sauvignon Blanc.  Of course, if you re-read the vintage conditions, you will see that Sauvignon was employed to add freshness and acidity to blend to balance the peculiar depth of flavour found in the Semillon in 2019 – directly a result of the warm summer.  It is strange to think that Sauvignon Blanc does some of the ‘heavy-lifting’ in 2019!  She posited that where once noble rot affected the Sauvignon a little too early in the autumn, climate change has meant that it is riper when the noble rot joins forces with the bunches and it is a particularly serendipitous occurrence in 2019.  It has meant that the wine might be lighter-framed and curiously weightless on the palate, it lacks nothing in intrigue, sheer pleasure and prodigious length.  As an aside, 2020 is apparently a more predictable blend, with some parcels being affected by passerillage (this is a phenomenon where the grapes become air-dried and slightly shrivelled, and therefore more sugar-concentrated), as opposed to being noble rot affected.  So in 2020, the blend is more classical and with passerillage bringing in the life-giving acidity instead of utilising a more significant percentage of Sauvignon Blanc.  All of this information was fascinating, and it goes to show that every single vintage of this magnificent wine tells a different story.  For the record, I think that 2019 is a particularly magical wine and, as you will see below, more people than ever are likely to have the opportunity to taste it.  19+/20 (Drink now and for a further four decades)

Finally, an inspirational initiative from Yquem in 2022.  I am told that the Lighthouse ‘by the glass’ campaign will go live in March.  This is the most impressive idea I have come across from the sweet wine capital of the world, and who better than Yquem to shine a light on this historic style of wine.

Yquem’s Press Release – Yquem has revealed its ‘Lighthouse’ program: a special partnership with some of the most inspiring hospitality venues around the world that will come together this March to shine the lights of Yquem.  Relying on passionate chefs and sommeliers, each Lighthouse will invite its guests to share a glass of Yquem 2019 before or during their meal, to savour and celebrate the moment – as an exclusive preview before its commercial release.  Spread across five continents, this list (below) includes many different styles of hospitality and gastronomy, matching Yquem’s versatility and universality.

Here is the current list of ‘Lighthouses’.  It is certain to grow!

Guangzhou – Too High at Rosewood

London – Portland – the host of Sandrine’s tasting today (and a stockist of Jukes Cordialities, too!)