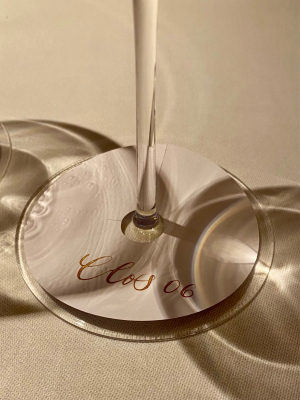 I was thrilled to be invited to a vertical tasting of Billecart’s Le Clos Saint-Hilaire last month, and this was the first time these wines have been lined up for forensic analysis. The launch of the 2006 vintage of this celestial cuvée was earmarked for early 2022, but it has been brought back to today – 1st December 2021 and this makes it all the more delicious that I can reveal my notes and scores in one of my Wednesday Wines columns. There are microscopic quantities of this wine in the UK, but it is possible to track down almost all of these vintages (after a quick internet search). So I wish you the best of luck in securing a few bottles of your favourites because it is already plain to see that this is one of the truly great Champagnes not only of the recent past but of the future, too. From a guide price point of view, £350 – £400 looks to be the sweet spot for the younger wines and I anticipate that the 2006 will hit this mark, too. Older vintages can climb steeply in price, and, as always, provenance is all.

I have been lucky to see all of these vintages, in turn, prior to their respective release dates, and this privilege is not lost on me. This tiny plot of Pinot Noir vines, situated just behind the winery, is described as thus by François Roland-Billecart (6th generation family member and the man who introduced me to Billecart-Salmon in the early Nineties). ‘In the 1950s my grandmother set aside this park-like space next to our house in Mareuil-sur-Aÿ with vines, flowers and fruit trees, for our enjoyment. Realising this outstanding terroir’s potential, my family decided to plant the first Pinot Noir vines here in 1964. We tried using the Pinot Noir to make white wine in small Burgundy barrels: an outstanding Champagne was about to be born. After several years of painstakingly tending the vines, the 1995 harvest, the first year of this unique cuvée, was remarkable. We called it Le Clos Saint-Hilaire after the patron saint of the church in Mareuil-sur-Aÿ. No more than 3,500 to 7,500 bottles are produced each year, and each is individually numbered.’ 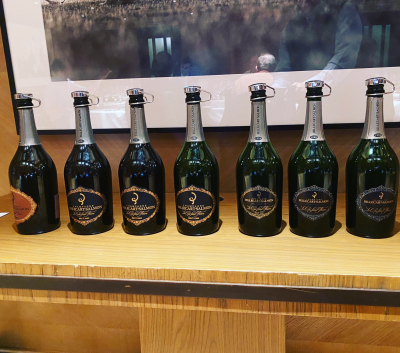 With phenomenal balance, majesty, extraordinary tension and depth, this is a rich and hedonistic wine on the nose, with surprising tension on the palate culminating in a strict finish. There is intense red fruit here, and in spite of the scale of the flavour and the mass of taste, it is superbly refreshing, too. For an inaugural wine with serious intentions, this is always going to be somewhat of a fall guy. So it looks a little more muscular and heavy in its shoes than all of the other vintages, but for what is to all intents and purposes an experimental LCSH, it is a triumph. While it looks and tastes a little older than it actually is, LCSH hunters will stalk this wine because it is such a rare beast, and it is the perfect starting point for this noble wine label. While there are some slight imperfections here, nostalgia always rewards the drinker, and as a standalone wine, it is incredible and wonderfully imperfect. In this august line-up, it is the immovable base on which all of the other vintages stand.  19/20 (Drink now to 2028)

Immediately more exotic on the nose than the 1995, there is superb sophistication and flourishes of flavour here which take the breath away.  The exotic moments are counterpointed with control and precision, and the sensational acidity holds court. It is hard to imagine the discussions that went into making this wine as epic as it seems, both on release and also today. The 1996 is about as extraordinary a progression from the ‘95 as could be imagined given the sophistication, sensitivity and gradual release of power that pervades all of your senses without ever overstepping the mark. 19.5+/20 (Drink now – 2050)

By contrast to the rigidity, calm and careful introspection of the elite 1996 vintage, the 1998 LCSH is open, pure, floral, and far less dark and mysterious than both the ‘95 and ‘96, making it the most expressive and genial wine in the collection. That is until you look closely at the finish. At once, drinking now and expressive and then, suddenly, firm, serious and chalkier, closing to a rather grand wall of acidity. While this vintage is not as powerful as the ‘95 or the ‘96, it is every bit as commanding. When you think you know a wine, albeit after only two attempts, along comes a vintage that flips your expectations and keeps your palate on its toes.  19/20 (Drink 2025 – 2035)

1999 LCSH is not as complex nor as powerful or as profound as the other vintages, but it is certainly silkier and more free-flowing, and this is its point of difference from the more muscular releases. The nose shows depth, welcoming brioche notes and stone fruit touches, but this is not as ‘Pinot’ as the other wines. Rounder, smoother and with moments of pear skin, crème caramel and heather this is a lighter and more fragrant wine that is drinking extremely well.  18.5/20 (Drink now to 2030)

Hold onto your hat because while I have always been a 1996 addict, my allegiances changed when I tasted the 2002 vintage. It is so silly just how fickle one’s palate can be and how brutal the lists in one’s wine mind become when a ‘flawless’ wine comes along. This is a simply sensational Champagne and while it has always been clear that Billecart can make perfect creations (the 1959 and 1961 Cuvée Nicolas François are two of the greatest wines, let alone Champagnes that I have ever tasted), when a 20/20 comes along the game changes and it will never be the same again. The fruit is kaleidoscopic, and the complexity here is baffling. The finish is so long that I had a ten-minute conversation and still felt like I had the wine physically sitting on my taste buds. This is a Champagne that defies belief. Calm, but also broad and relentless, there is a veritable ocean of flavour here, and yet it is so ordered and so complete it is sensational. Effortless and beautifully balanced, this is the thoroughly engaging side of LCSH.  20+/20 (Drink now to goodness knows when this wine will run out of gas!)

This is the finest wine in 2003 of every single style I have ever tasted. It is a game of contraventions in one glass. It is Hilaire-ious. With epic density and also freshness, an insanely long and clean finish with unnerving crunch, this is a shapeshifter and also a Titan with the most extraordinary, swirling tail of fruit. Seemingly forward and open on the nose and certainly already drinking extremely well, it also seems to have the power and energy to live forever. Completely unusual and ridiculously ostentatious outlier, I cannot fault the outrageous quality of the fruit, the hedonistic flavour and the roller-coaster one rides when you dare to taste this wine. Not for the faint-hearted, but as thrilling as it gets, this wine must be worthy of a perfect score because nobody else came anywhere close in 2003, and this achievement alone is worthy of my unqualified admiration. 20/20 (Drink now – 2035)

A baby. It was unfair to ask this wine to perform on a stage so crowded with opinionated and excellent wines, but 2006 LCSH didn’t bat an eyelid and, in fact, opened up exponentially over the hour that I managed to spend glued to this glass.

With more perfume than I expected and crammed with chypre and white smoke details, these exotic details are perfectly counterpointed with terrific complexity and thousands of layers of fruit and spice. Quieter and more closed than the others, but complex, calm and blushingly pretty, there is a lot of power and potential hidden in the folds of this wine, and while they are reluctant to emerge, it is possible to get a sense of their potential already. While the depth of fruit is extraordinary, I am only seeing the tip of the iceberg today. I can only imagine the difference a year makes, let alone ten, twenty or thirty! I hope I am here to taste this wine to realise its potential. Either way, this is a staggeringly serious vintage for LCSH, and it might well prove to be another flawless release given time. For now, I will keep my cards respectively close to my chest.  19.5+/20 (Drink 2028 – 2050)

Mathieu Roland-Billecart is convinced that NV Billecart-Salmon Brut Sous Bois is the wildling offspring of Le Clos Saint-Hilaire (my words, not his) given its similar shape and momentum on the palate. Given that Sous Bois is a £65 proposition, I would recommend that LCSH virgins get well and truly inducted into this way of life via Brut Sous Bois and then when this wine makes up a significant percentage of your own DNA, it is an easier and far less daunting step up to Le Clos Saint Hilaire. (NV Billecart-Salmon Brut Sous Bois £70.00, reduced to £65.00 by the case of six bottles, www.champagnedirect.co.uk; £65.00., www.bbr.com; £74.00, www.harveynichols.com; £64.00, www.thechampagnecompany.com; £67.95, www.thewhiskyexchange.com).

Because these cookies are strictly necessary to deliver the website, refuseing them will have impact how our site functions. You always can block or delete cookies by changing your browser settings and force blocking all cookies on this website. But this will always prompt you to accept/refuse cookies when revisiting our site.