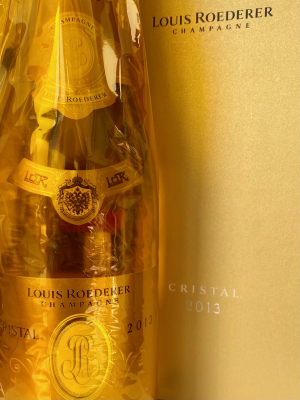 The History of Cristal – A Franco-Russian Alliance

In 1876, Russian culture represented the height of sophistication – coloured by an exuberant history, and gloriously triumphant with its decorative arts and architecture.  The Russian style of dining replaced the French with its vigour and passion.  In 1876, Alexander II turned his back on his father’s politics, repealed his unpopular measures and abolished serfdom.  Patriotism deepened and nationalism boomed.  Alexander II, a great lover of good food, set the exact duration for meals: 50 minutes precisely.  In 1876, Louis Roederer was 31. He loved to travel and he also loved Russia.  Following in the footsteps of his father, who died six years earlier, Louis Roederer was infatuated by the Russian spirit, and he ensured that the Champagne which bore his name dazzled at every opportunity.  His father had raised the profile of the House to become one of the most sought-after at the Imperial Court and in also Russian high society.  At that time, almost one bottle in every ten drunk was a Louis Roederer Champagne.  Roederer cultivated Russian taste and so a considerable dosage was added to his Champagnes, often exceeding 100 grams of sugar. As a result, Champagne houses often produced sweetened Champagne for the Russian market, dosed with at least 150 g/L and sometimes up to 250 g/L.

In 1876, the Emperor lived lavishly on Champagne, intoxicated by its lively bubbles.  No official receptions took place without the French wine, synonymous with celebration and joyousness. He saw to it that he received the best wines, and regularly sent a palace emissary to Reims, and more specifically to the Louis Roederer cellars, to reserve his bottles.

One day in 1876, Alexander II noted to his sommelier that there was nothing to distinguish the Champagne served at his table from the versions sold across the country.  On learning of this imperial request, Louis Roederer commissioned a Flemish master glass artisan to create an exceptional crystal bottle with a flat bottom to withstand the pressure.  From then on, the Tsar only drank Cristal Champagne in its fine, unique bottles bearing the imperial coat of arms. The presentation of the bottle has barely changed to this day.  In 1908, the House was even appointed ‘Official Supplier to the Court of His Majesty the Emperor of Russia’ by Nicolas II.  It provided the imperial court with this exceptional Champagne every year until the Russian Revolution in 1917.   The cuvée was then lost for several years before being revived in 1924 in its current form – the only change being the replacement of the original crystal by the less-fragile, white glass.

60% Pinot Noir, 40% Chardonnay: taken from 45 different lieux-dits, one third of each from the Vallée de la Marne, the Montagne de Reims and the Côte des Blancs

Harvest was carried out between 27th September – 15th October,

I wondered if I had lost my way with Cristal over the last handful of releases, perhaps never to return, because I was spoilt many years ago when I had the opportunity of drinking some of the most famous, older vintages ever made of this wine.  The wines in the Nineties and early Noughties seemed riper and less stern in their youth than I would have wished for because I always think of this elite wine as a label with great potential and not an early drinker.  Of course, I understand that people tend to drink Champagne very young these days so perhaps a change in emphasis was to be expected.  I have long accepted that what I consider to be ‘classic Cristal’ might not happen again and, if that was the case, I would not feel compelled to seek out this wine.

It was, therefore, incredibly encouraging to hear Jean-Baptiste Lécaillon say, unequivocally, that it was an intentional decision to make the wines seem more flattering in their youth, in this period, not least by introducing the soothing tones of oak barrels in the recipe.  But, more recently, there has been a gradual shift back to making more structured wines.

So it follows that I am beyond excited to tell you that the 2013 vintage looks to me like it possesses all of the ingredients – shape, style and grandeur – which belong to my beloved Cristals of a bygone era.

In 2008, Louis Roederer started to change tack.  J-B said, “we have turned a page towards haute couture farming, embracing organic and biodynamic techniques”.  They profess to be a little more laid back and have relaxed their obsession with chasing the so-called ‘Roederer House Style’.

This is the second year of organic and biodynamic farming for Cristal giving it more concentration and a heightened sense of the chalky terroir.  In the Eighties and Nineties they used to pick Chardonnay first and Pinot Noir second, they now do the reverse, and this allows Chardonnay to gain more concentration and “salinity”.  Interestingly, this is precisely what they did in the old days and the resulting wines were those that I treasure in my memory.

2013 is a dynamic wine with an exquisite salty and chalky expression on the finish.  While the perfume is not as reticent as the palate there is still a mesmerising scent of strict citrus notes and faint nuttiness.  There is arresting purity and drive here in fact a sip leaves one out of breath, such is the complexity on offer and the time taken for the palate to compute what is happening.

On the Zoom tasting launch today, there was talk about the perfect drinking window for Cristal being 15-20 years down the track so, in theory, this wine should come on stream between 2028 and 2033.   I, for one, would be amazed if this wine started to mellow after such a short period given the majesty of the flavour, the density of the acidity and talcy chalkiness on the finish.  I think that this is not only a great vintage for Cristal because it is also a historic vintage given that it harks back to an era when this wine was considered one of the finest sparkling wines on the planet.  In 2013, I believe that it has climbed back up the hill to where it belongs.  Just please promise me that you won’t drink it too early!  19.5+/20  (Drink 2030 – 2055)