I have two wines for you this week which I know very well indeed, so forgive me for the extremely long notes below.  Both are brand new releases, which have only just landed in the UK, so get in quick and order your stock while the weather is on top form! 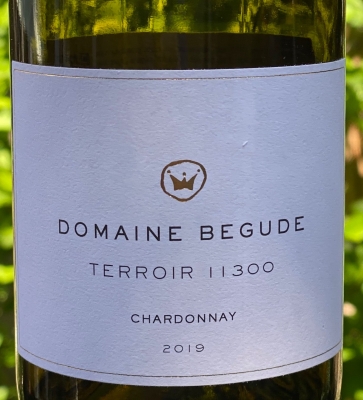 Please note that this wine will be in stock and available online from 8th June 2020.

James and Catherine Kinglake bought Domaine Begude, an idyllic vineyard and winery, back in 2003.  11300 is the postcode for the little village of Cépie, in the Limoux sub-region of the Languedoc, 15 miles southwest of Carcassonne.  High on the hillside above Cépie is where James and Catherine organically tend their vines, making delicious and amazingly well-priced wines.

I first met this delightful couple back in 1999 when I was touring with my first wine book.  It was at Waterstones in Clapham where we caught up and, while I signed a book for them, they told me that they were thinking of giving up City life and going to make wine in France.  Of course, I told them they were fools.  We kept in touch and when James and I met a few months later he showed me a few prospectuses of wineries for sale.  One particular property caught my eye.  I looked at a map of the vineyard and, given the fact there was Chardonnay planted coupled with the fact that the contour lines suggested some altitude (330m+), I asked James was this Begude?  The name of the property was confidential, and not noted on the documents but, judging by my experience of tasting Begude wines in the UK, I thought that it was a very good chance that this was the very same property!  Fine Chardonnays, from cool-climate regions in the South of France, were very thin on the ground twenty years ago and this was already a favourite property of mine and one I had mentioned in my column in the Daily Mail a good few times so I was fascinated to hear that it was, indeed, Begude.  Without hesitation, I said that they should seriously consider looking at this estate.  It was on the top of James’s hit list, too, and not long after this, they bought the land and fully renovated the house and the winery.  I visited them soon after and experienced for myself exactly why this is such a special place.

It is no surprise that this ‘postcode’ wine so accurately reflects its origins.  I will never forget standing on their lawn, with an uninterrupted view of the Pyrenees some 80 miles away, and breathing in the cool, breezy air.  A faint saline tang manages to make its way up from the Med and, added to a hint of lemony pine resin from the tall trees shading the property, the perfume was both invigorating and mouth-watering.  These dynamic tasting notes are found in every wine that is made under this label and it gives them uniqueness and authenticity which oceans of other wines desperately lack.

2019 Terroir 11300 Chardonnay is a beauty.  With a smattering of carpentry (a mere 15% is barrel-fermented in 600L demi-muids while the rest sees stainless steel), this is a slender, resonant Chardonnay with a keen, bone-dry, acidic finish and wonderful citrus and ozone detail.  If Chablis was plonked down 25 miles from the Mediterranean its wines would taste like this!  The organic mantra gives this wine undoubted ‘vif’, or liveliness, which means that it ploughs its own furrow on your taste buds, making them stand to attention and listen carefully to its song.

While this is an accomplished aperitif style, there is more food-matching skill here that meets the eye.  When I was buying the wines for Bibendum Restaurant, in the Michelin Building, in London (I held this position for 26 years, from 1990 – 2016), I listed Begude Chardonnay (a wine that was actually one notch down the ladder from my featured Terroir 11300) as ‘House Chardonnay’ in the Oyster Bar on the ground floor of this iconic building.  It was, perhaps, one of only a handful of wines from the 1000-strong wine cellar which had a good stab at going with every single dish on the OB’s menu.  Simon Hopkinson was the chef at Bibendum, at the time, and so the menu was sheer heaven.  The food was sublime and when Burgundies and Loires came up short, Begude kept its character and romanced every dish and all who tasted it. 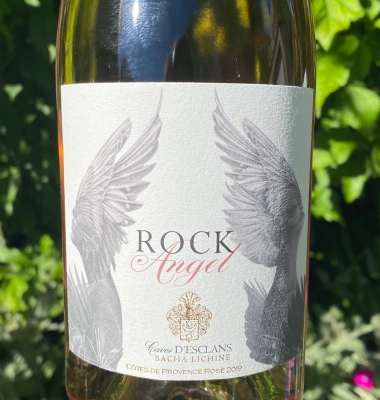 I have never heard Sacha Lichine call this wine ‘Whispering Angel in a leather jacket’, but he is reported to have done so.  To be honest it doesn’t sound like him – Sacha is a more sophisticated and nuanced fellow!  Having said this, I understand the idea behind this mental image, but it does not completely work for me.  Leather jackets, bikers, and rock ‘n’ roll are not necessarily aligned with sophisticated, elite-level, Provence Rosé.

There is, however, no doubt that this wine is designed to catch the eye with its stunning feathered ‘angels’ on the label and also its commanding flavour, so this is certainly a wine which sets out to shock and surprise the drinker.

Priced at a few pounds more expensive than Whispering Angel, Rock Angel is a very different proposition to its superstar stablemate.  If Whispering caresses the palate in an alluring, come-hither manner, Rock aims squarely at your heart and unleashes a direct onslaught of emotional flavour.  Indeed it rocks the foundations of your olfactory system.  In this regard, it is far more aligned with the two Grands Crus in the Lichine portfolio, Les Clans and Garrus, but given that these two pioneering wines retail for approximately £55 and £95, respectively, you will sense that I find Rock Angel a very inviting proposition indeed, not least from a rapport qualité prix perspective.

After this cuvée was first conceived, the recipe appeared to lurch around a little as each vintage was released.  It was a restless wine, but in 2019 it has found its roots and it possesses more than a little gravitas while still drinking very well from the off.  This finessing has involved pulling back on the oak component (30% in demi-muids) and this has resulted in the finest release to date.  In the past, I would happily have jumped over Rock Angel, hurrying swiftly from Whispering Angel, deployed as an ice-cool aperitif style, to Les Clans and Garrus for full-on gastronomic salvation.  But I feel I will leave Whispering to the millions of fans who love it, and drink it with slavish enthusiasm, and start my own Esclans journey with Rock.

2019 Rock Angel is a suave and centred wine and while it retains some of the frivolity of Whispering, with tender moments and hypnotic pink grapefruit and melon tones, it has depth, tonality and, crucially, a long, dry and masterful, finish.  I would wager that most wine-keen folk, who happily bathe in Whispering without really giving it a second thought, would fall off their sunbeds if they tasted this wine and found out that they could trade up for less than a tenner.

So here it is – I know that my readers will do the right thing and get their hooters in a glass of Rock Angel before the week is out.  Whispering will continue its sotto voce delivery while Rock will communicate firmly and directly, with more than a hint of passion and yearning, to experienced wine lovers’ senses.  It will be sure to recruit followers, and it surely deserves to do so, but don’t tell everyone about this wine – after all, it is a relatively limited production, like Les Clans and Garrus!

Furthermore, I would wager that, from this moment onwards, Rock will be the firm foundation on which many build their upmarket, summer wine indulgences and Whispering will be left to do what it does best – to please its adoring crowd.   18/20 (drink now – 2021)